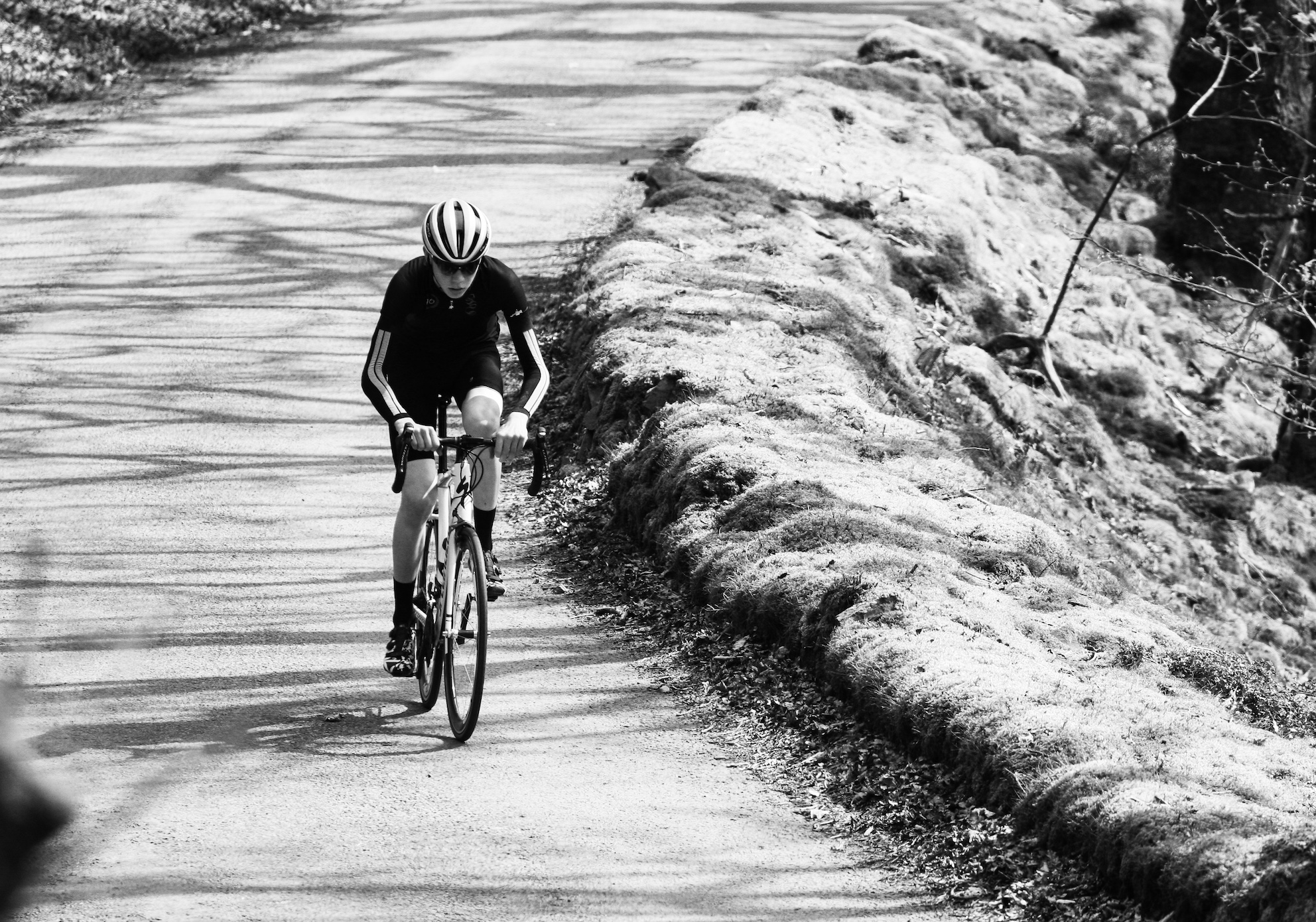 Please note, none of these pictures were taken during the actual HRS ride – I was solo and busy riding my bike, plus the weather was poor for much of the time. They all feature Tom Townsend on the same climbs though – just in better weather!

I’d just embarked on a High Rouleurs Society (HRS) ride, called The Journey. Like an Everesting, HRS rides are overseen by the lovely folks at HELLS 500 in Melbourne. ‘All’ I needed to do was complete my ride within the HRS Rules, upload proof – my ride data from my Garmin – to Strava and Veloviewer and HELLS 500 would then sign off on the challenge, assuming they were happy with my data.

HELLS 500 oversee three types of ride: Everestings and the two types of qualifying HRS ride: The Limit and The Journey. All three require preparation, a significant effort and a long time in the saddle. They’re all ‘special’, but if I could keep just one, it might just be The Journey. Most people probably assume an Everesting would be more precious, but I’m not so sure: read on.

Not many people have completed an HRS ride full stop, but for those that do, The Limit is much more common because the qualifying criteria are most easily achieved by tacking extra laps onto an Everesting ride:

I’d added 10 extra laps to my Everesting of Whiteleaf in 2016, so had already ticked part of the HRS box, but not all of it. The Journey had been on my mind ever since. The rules were simple – but different:

I think my love affair with The Journey really starts with maps. I’m old enough to remember laying maps out on the kitchen table when planning a ride. My brain is wired in such a way that I feel happiest when I can visualise the whole, rather than just what I can see on a small screen. This is where The Journey starts to push all the right buttons: it requires route planning.

No matter where you plan to complete your ride, the clock is against you and that requires two thought processes: first, how to get as much vertical into your ride as possible in the shortest distance (and I added a personal addition to this – “without resorting to reps”) and second, how much time you can allow yourself off the bike, asleep? The journey requires planning and I love planning. It’s one of my strengths and helps make up for the fact that I’m no more than an average cyclist compared to some of the extraordinary cyclists I meet!

Maybe not physically, but mentally and logistically, I had The Journey down as ‘harder’ than The Limit. For a start, it was effectively a two day effort, rather than a single ride. Perhaps the bigger challenge though was simply finding a route that was short enough to complete in the time-frame, but that included enough hills for the required vertical gain. In the world’s big mountain ranges, this would be relatively easy, but in the UK, it’s really quite difficult. I plotted the route three times in Wales and on each occasion, decided the route was just too long – 700km+. There were simply too many ‘flat transfers’ between climbs and the 36 hour time limit would beat me.

I turned my attention to Exmoor in the south-west of England instead. It’s a relatively small, quiet, beautiful moorland, reaching a mere 500m above sea level, but it’s criss-crossed by an extensive network of small roads – there were literally hundreds of climbs and many of them started from sea level, so the ascent soon accumulated. Added to that, the general flavour was ‘steep’, so although the vertical gain would be hard, it would also be fast and therefore suitably ‘efficient’ for a ride like The Journey. There were no flat roads on Exmoor.

The weather however wasn’t playing ball. A seemingly good forecast had failed to spot that sea fog would roll in off the sea over the next few days and as I drove back home, the conditions resembled winter – poor visibility, soaking wet and truly filthy roads!

In the first few hours, I established various things: I had good legs, the roads were filthy and the fog wasn’t going away. I spent the first five hours in fine rain. My bike and I slowly changed colour from ‘clean’ to ‘farmyard brown’. I stopped drinking from my bottles, except when stationary, with the lid removed! Then I punctured: my summer tyres weren’t really up to these unexpected conditions. I toyed with just heading home – I was no more than an hour away from a hot shower and my chimp suggested I could regard this as a ‘test-run’ and try again, later in the week.

The top of the moor was foggy and yes, it was soaking wet, but it wasn’t terrible, so I decided to just carry on – my legs felt great and I knew that days like that didn’t come along all the time, so I should use them. I restocked on water, food, spare tubes + CO2 and headed eastward across the moor, using every climb I could in my relentless search for vertical.

There was however, a fundamental problem: my Garmin had only registered about 25% of my climbing in the first five hours or so. I knew that I should have been approaching 3,000m by now, but the Garmin said just 700m! I sent my son Tom a message back at basecamp and he re-plotted the route on various different apps, responding with reassurance that I was well on track.

Back in the planning phase, I’d added two additional personal rules: no hill repeats (I might repeat the odd climb on the following day if it led to something else, but I wouldn’t run laps), and a resolve to do Exmoor proud i.e. I’d include some of the hardest climbs, even though they’d weaken me. To that end, around early afternoon I found myself on Dunkery Beacon. Simon Warren’s book, 100 Greatest Climbs, gives this 10/10 for difficulty and he’s not far wrong. It’s long and savagely steep, throughout. Even worse, I’d resolved to cross the River Exe at the 1,000 year old stone clapper bridge known as Tarr Steps, but to get to that, I had two 25% climbs and to escape the valley afterwards, I had another really nasty, 28% berg. By the time I headed west again, back across the moor to my food stash, I’d got 200km and 5,000m under my belt.

Finally back at base around 10.00pm, I sat at the kitchen table while Jenny (my wife), fed me and I relayed my route to Tom once again, who declared my day to be no less than 6,000m (and 262km). A big day – one of my largest ever in terms of up (outside of Everestings).

I rolled away at 7.00am the following morning, again in slightly damp, murky conditions. As I did so, two thoughts crossed my mind: first, that the Journey was a wonderfully ‘proper bike ride’ and second, my Garmin was struggling to register ascent again!

I sat on a bench overlooking the sea, catching the late afternoon sunshine and pondering other Journey possibilities: Tom had plotted an absolute killer ride in the north of England which scared me every time I thought of it…

The Journey: a ‘proper’ bike ride.