* The stats: In late June and early July of 2012, I rode the entire Tour de France route for that year: 21 stages, spread over 23 days (two rest days). The format exactly followed that of the real Tour, except that we started and finished seven days in advance. Leaving aside the Prologue and two Time Trials, I rode 18 stages that averaged 192km each. In total I rode 3,500km. I had 24 companions and together we were the ‘Lifers’ for the 2012 Tour de Force* – an annual charity ride, organised by the William Wates Memorial Trust, which follows the Tour de France route of that particular year. * The Tour de Force has recently been rebranded as Le Loop, having teamed up with ASO, the organisers of the real Tour de France. 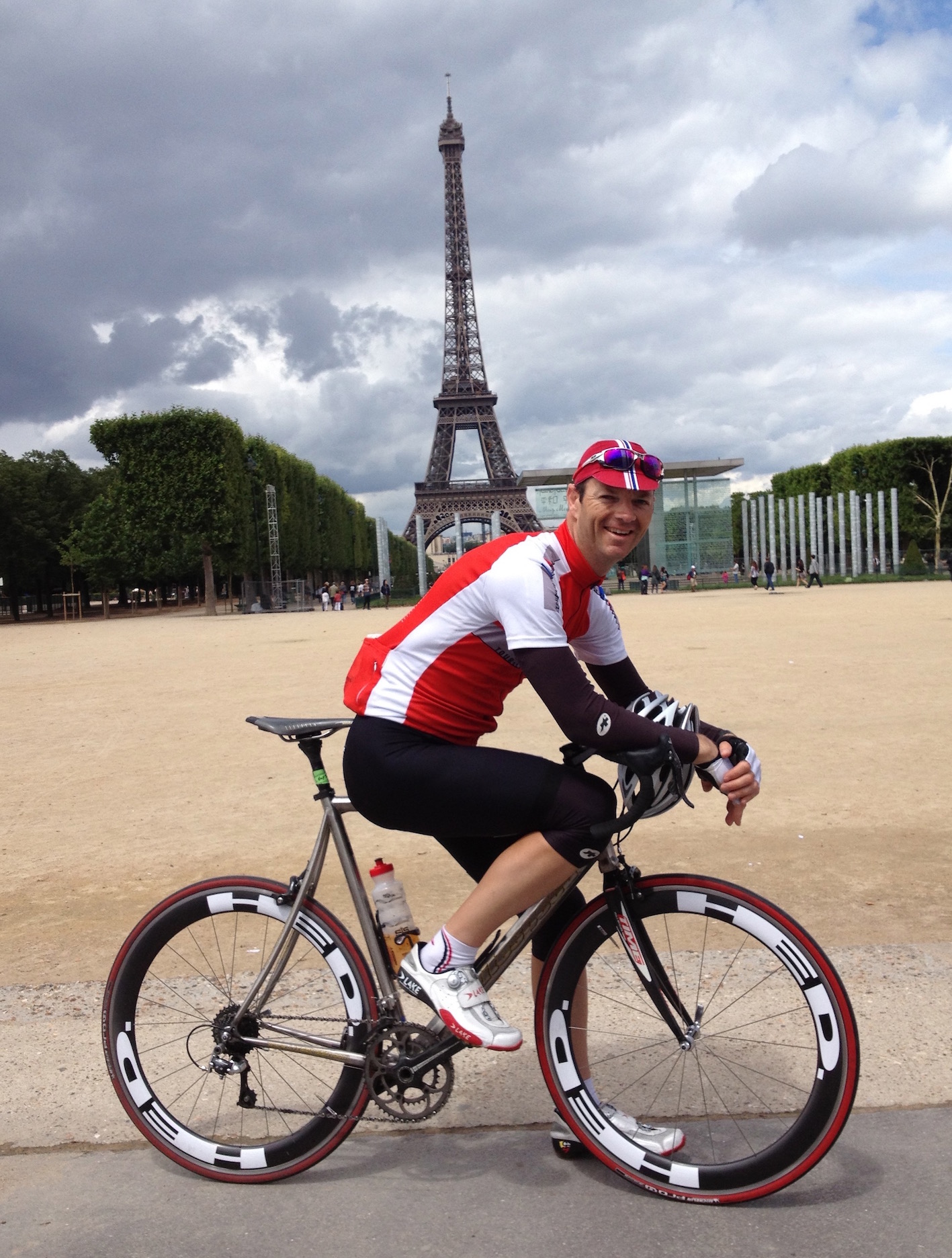 * My best days were probably Stages 1, 8, 10 and 16 (Etape Act 2).  Three of these involved bad weather: I would ride harder and faster in the cold and wet.  My worst days were Stages 2, 11 (Etape Act 1), 13 and 15.  It’s not chance that these generally followed days where I’d tried really hard to go fast, or attack a certain climb, thereby working harder than was prudent.  I’d pay the price the next day, with weak legs and general lethargy.  My single worst day was probably Stage 15, but it was primarily a mental battle.  The single most memorable day was probably Stage 5, simply because so much happened in one day and the final hail storm and flooding added a surreal twist.  I finished the day sitting in the bottom of a shower, fully clothed!

* I stayed in 19 hotels, endured 14 coach transfers between one day’s finish and the next day’s start points and rode through three countries (Belgium, Switzerland and France).  I survived on an average of 5 – 6 hrs of sleep a night.  At the end of Stage 2, riding into Tournai, I actually fell asleep on the bike!  Twice!  Fortunately it was only momentary and I woke up before falling off.  I started to drink more coffee after that.

* The really big shock for me was the way that time ‘off the bike’ became so pressurised.  By the time you’d showered, eaten dinner and been briefed on the next day’s route, it was almost invariably 10.00 pm or later.  The list of things still to do could easily run to a couple of hours (call home, blog, stretch, fix a mechanical issue, do some washing, sort out tomorrow’s kit, pack bags for an early start, get a massage), but in reality, you needed to go to sleep as soon as possible so that you could recover.  Life very quickly distilled down to the barest essentials: wake up, eat breakfast, ride all day, find hotel, unpack, shower, eat, repack, stretch, blog, sleep.

* I ate ridiculous amounts of food.  We had four feed stops each day, in between which I’d snack on gels and bars.  Breakfast and dinner was an opportunity to eat until bursting, but within half an hour or so I’d feel hungry again!  By half way through the ride I’d lost 2 kg.

* I think my overall success can be attributed to three things: I prepared really diligently and never missed a training ride; I tested my kit to death beforehand and I was supported by a wonderful team of people and significant others, both before and during the ride.

* The ‘power of team’ was a revelation.  There were 24 riders attempting the whole Tour and we were called ‘Lifers’.  I was lucky and never had an “I can’t do this” moment, but I had plenty of hours each day when I’d have happily been anywhere but on my bike.  Within days of starting, the strength of feeling and support for each other was amazing and slightly bemusing.  We barely knew each other, but the intensity of the experience and the shared hardship created rapid and significant bonds.  When my bad days arrived (see above), it was the people around me, with their humour, conversation and mere presence, who gave me the strength to finish the day.

* The experience was more intense than I would ever have expected.  The combination of extreme daily exercise, lack of sleep and the constant risk of failure all served to heighten my senses: I became more emotional, and more compassionate, but at the same time, far less tolerant of anything that interfered with our schedule, progress and well being.  A psychologist would have found the whole thing fascinating!   I kept smiling the whole way through and I think that helped! 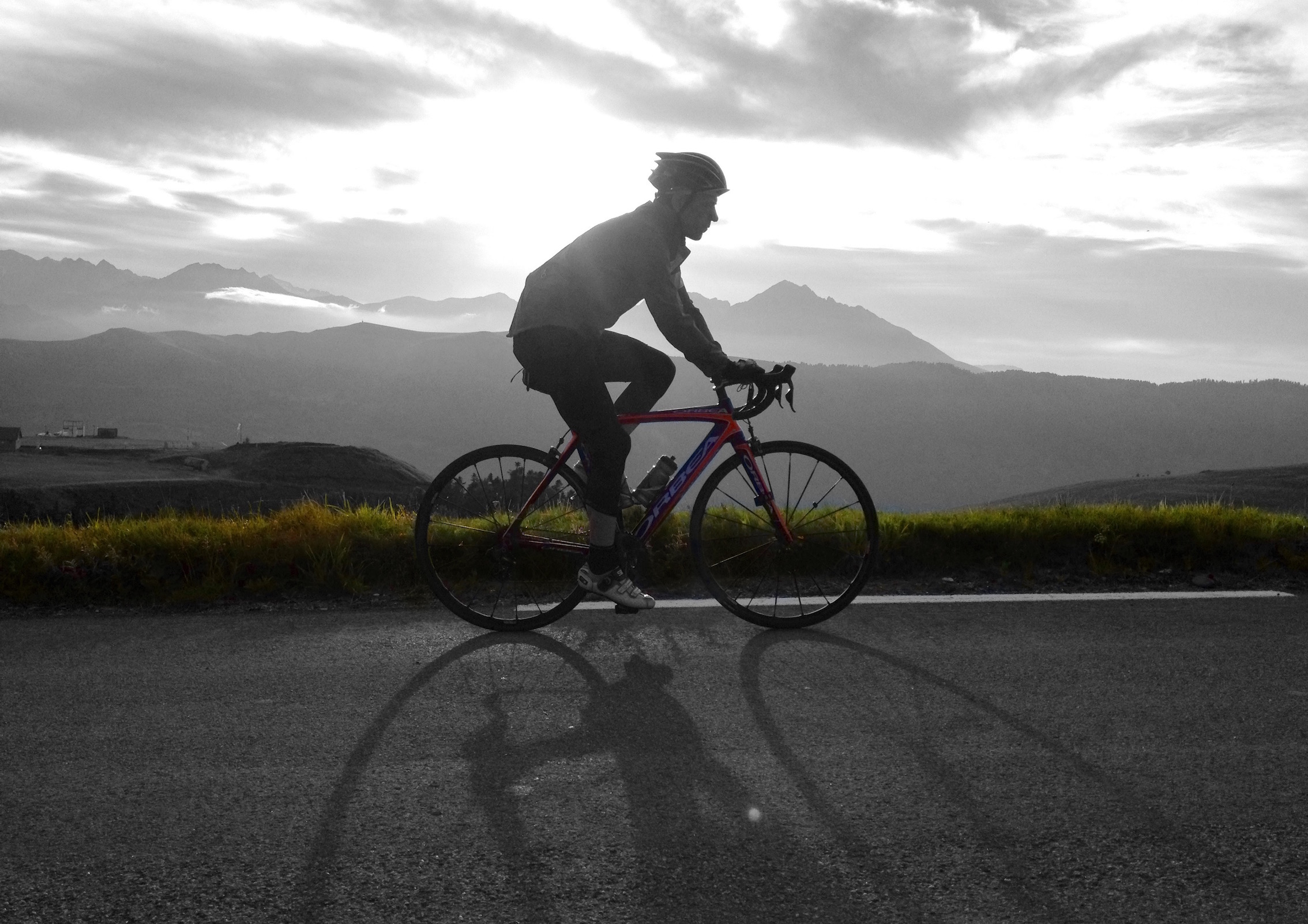 Pitsi, the man who gave me my nickname – Sir Guy Litespeed – and a pretty constant companion on almost every stage.

* The threat of failure genuinely haunted me until we emerged from the Alps, about half way through.  At that stage I began to feel quietly confident and even dared to say so in one of my blog entries.  However, I then had a mental melt down on Stage 15 and realised that physically, I was deeply tired and the only thing keeping me going was my head.

* I noticed that my body lost the ability to heal minor cuts and grazes.  I split my lip on Stage 3, but it didn’t heal at all.  I had a couple of cuts on my leg that just didn’t get better.  Three days after getting home, they just went away.  It was as though my body could only focus on the essential overnight recovery and anything minor would just have to wait.

* Arriving in Paris was something of an anti-climax relative to some of the epic days in the Alps and the Pyrenees, until we crested a rise near Versailles and got our first glimpse of the Eiffel Tower.  At that point, I genuinely got goose bumps and I think I grinned for the next 24 hours, solid!  I slept a lot in the first few weeks after I got home and it took me about three weeks to start feeling normal and six weeks to completely recover.  I started riding my bike again seven days after returning from Paris.