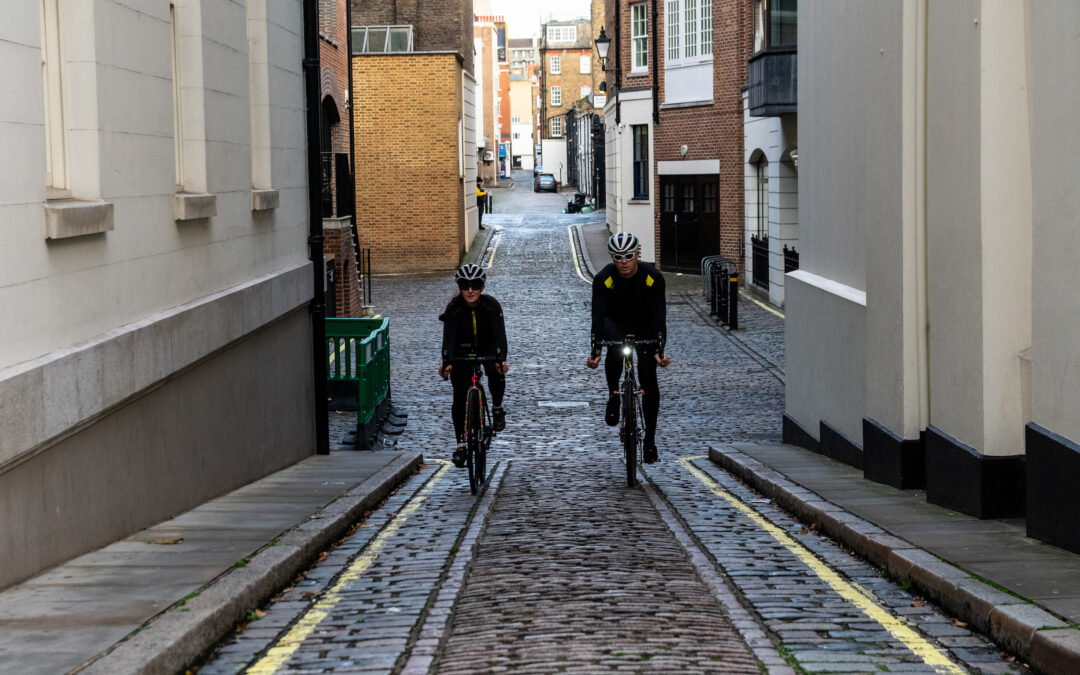 The idea of ‘London – Roubaix’ was born out of Covid-19, travel restrictions, Lockdown 2.0 and a little personal challenge I set myself, back at the start of 2020, namely to complete at least one 100 mile ride, every month of the year. I added a few extra rules: one ride had to be on gravel (I did two in the end), one had to be on a fixie (that was HARDER than I expected!), Zwift rides counted too (phew – I broke my shoulder blade in July and was confined to the turbo for a month) and finally, one had to be on cobbles. ‘Easy’ I thought (because I normally ride the course of Paris – Roubaix at least once each year), but then Covid came along and Northern France was off the menu.

I normally ride the route of Paris – Roubaix a couple of times each year – I even have a bike specifically set up just for cobbles – but 2020 – a year unlike any other – removed that option. By late autumn, I was having serious withdrawal symptoms and an idea began to smoulder in the back of my mind: what if I could link together all the cobbled streets of Central London?

I started hunting them down: some I knew already, but I put out requests for cobbled street names via social media, I stalked Street View relentlessly and I even flagged down Black Cabs and offered them a fare if they’d mark cobbled streets on an A-Z map I carried with me! Slowly, my London – Roubaix took shape.

By mid November, I had the outline of a route and enlisted an accomplice from the ASSOS LDN crew, Tamala McGee. Together, we recce’d it one Tuesday during Lockdown and then tweaked it extensively. We set ourselves some ‘route rules’: 1. it needed to be a clear loop; 2. it needed to flow as much as London’s street lights and one way systems would allow; and 3. above all, it had to take in as many cobbled sections as possible – or ‘secteurs’ as they’re known on the real Paris – Roubaix route. We avoided ‘dead-end’ streets and mews and other cobbled sections that were too far away from central London.

The real Paris – Roubaix route contains 29 secteurs, which account for c.56km of cobbles in a 260km route. We had landed on a 39km loop, containing no less than 51 cobbled streets and a comparable ratio of cobbles to tarmac. Who would have thought that Central London could offer that!? Next, we needed to ride 4.5 laps to turn it into my November 100 mile ride.

We started the route in Marylebone on the second Sunday in Lockdown 2.0. Our 39km loop comprised the following 51 cobbled streets, grouped as follows:

The best section of continuous cobbles are undoubtedly the 9 Wapping secteurs – your really could be on the real Paris – Roubaix (albeit without the mud). The roughest sections – possibly akin to 3 star sections of PR cobbles, are Broadstone Place in Marylebone, Earlham Street in Covent Garden, Gough Street in Clerkenwell, Westland Place in Shoreditch and if ridden at speed, the whole of the Wapping piece – this part is LONG and if ridden really hard, begins to give you a feel for what the real PR can feel like. There’s only one cobbled climb on the whole route: Back Hill in Clerkenwell: again hit it hard in your big ring and you can briefly pretend you’re chasing Sagan up the Koppenberg!

In total, our 4.5 laps, or 161km, took us just over 8hrs moving time. The route is almost pan flat – big ring all the way – but there were over 200 cobbled secteurs to deal with, plus more stop/start than any other route I’ve ever ridden, which begins to take it’s toll. By the end, I was tired – maybe not as tired as after the real Paris – Roubaix, but nonetheless, kudos to anyone who follows in our tyre tracks and rides 4.5 laps of this route. If these travel restrictions continue into Spring 2021, I may have to ride 6.5 laps for the full 250km+ experience!

My thanks to the Black Cabs of London for their help, to everyone who responded with street names via social media, to Tamala McGee for humouring my madness and Nelly from ASSOS LDN for capturing the moment behind the lens.

A word of caution: this route could be DANGEROUS! It’s all completely legal (i.e. One Way streets are taken in the correct direction), BUT so many of the cobbled sections emerge suddenly onto busy roads and much of the route finding is extremely intricate. You’re going to need to be super-alert at all times and I would strongly suggest you ride this loop before 11am on a Sunday morning, only!!! As always, familiarity makes it safer i.e. you know where the trickiest traffic spots are and where the risks are highest. I used blinker lights and wore visible clothing the entire time. When we completed the 100 mile version – 4.5 laps – familiarity meant that the sections really began to flow, in a way you would never believe possible in central London – again, we had Sunday and Lockdown 2.0 to thank for that luxury! If you’d like a guided tour, hit me up: guy@sirguylitespeed.com

Also note: I left out some cobbles – there were plenty of streets that were too far away from Central London – such as in Kensington and Greenwhich and they involved too much road distance for too little ‘cobble payback’. I couldn’t work out a good way to include Fish Hill near Monument without it feeling contrived, so that was also omitted, as was Middle Temple, which was entirely closed off due to construction. If you feel you have a street worthy of inclusion, please email me the details and I’ll take a look: I regard my route as an ‘unfinished masterpiece’: guy@sirguylitespeed.com