The Italian’s have a word for people like us: ‘salitomani’.  It translates as ‘climbing freak’ and is used to describe the local, hard-core cyclists who ride the most heinous hills, not because they have to, but because they like to.

And we’re not talking about the vast majority of climbs that you see each summer on the TV, but the harder ones, that are too steep, too narrow and generally too nasty to feature in a three week professional stage race, for fear that the field will become too split apart and the time gaps too great, thereby destroying the excitement of a close race.

But the Italian’s favourite race – the Giro d’Italia (or Tour of Italy), dares to be slightly different and has consistently included a few of these ‘even harder’ climbs and they’ve quickly picked up absolute notoriety: climbs like the Monte Zoncolan and the Mortirolo.  A certain Mr Armstrong described the latter as “the hardest climb I’ve ever ridden” and Cavendish followed this up a few years later with “it’s savage, f***ing savage – unbelievably steep and it just goes on and on.”  We have our date with the Mortirolo (Pantani route), today.

Phil Deeker says “Back up the Mortirolo is always a good way to open the last day. This climb is tough and steep all the way up, but by now legs are used to this type of road.” Another long descent takes us to one of the most beautiful climbs of the event: the Passo Vivione. An absolute jewel of the Challenge, to be savoured. After the third long descent (another 30km stretch) we join the route of the 2011 Giro until the end of our stage for one final climb before plunging back down into our start town for the finish.

Firstly, my apologies for ‘no post’ last night.  It’s fair to say that things reached crisis point and all non-essentials (which included this blog), had to be put aside.  Stage Nine was long.  Not so much in terms of distance (c.190km), but in terms of climbing (once again).  I rode uphill for 95km.  We had a morning of beautiful sunshine, but a storm on the Gavia, which is a bad place to have a storm. 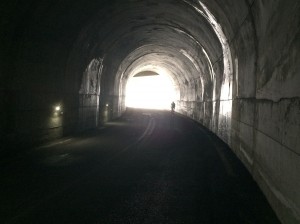 Loren exits the tunnel onto the upper slopes of the Gavia. 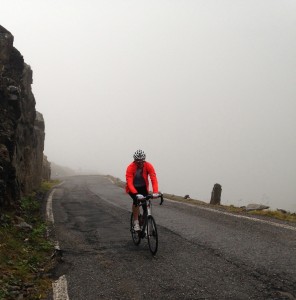 The Gavia in rain – not a great place to be!

The descent was entertaining, but we made it in one piece.  Safely down in the valley, Loren and I were the last two to head up the Mortirolo, the final climb of the day: everyone else had either finished, or abandoned.  But daylight was running out and in the end, Phil (correctly), drove up alongside and told us to finish the day at the summit.  I say ‘day’, but it was now 8.45pm and pitch dark.  The descent would have been impossibly dangerous.  So, yet another epic day, but we’d still climbed all our cols.

However, on the way back to the hotel in the van, Phil dropped a couple of bomb-shells: firstly, because of our detour on Stage One, just 101 cols were on offer if we rode the entire ten stages and secondly, the final day was yet another really tough one and a late finish wasn’t an option.  All the pressure came flooding back and failure suddenly looked likely, all over again.

By the time we reached the hotel, Loren was also feeling pretty sick.  We both (plus many others), had developed chest infections and he wasn’t even sure whether he would be able to ride the final day.  I spoke to Phil and we agreed that I would simply get up at 5.00am and ride away by 6.00am at the latest.  Loren looked unlikely to start.

I headed upstairs, repacked my bags and set my alarm.

5.00 am today was a rude awakening.  I popped some industrial strength painkillers (thanks to my room-mate, Jim), dressed and headed downstairs.  I was eating a bowl of cereal and sipping an espresso, all on my own in the dining room, when a shadow appeared next to me: it was Loren, dressed ready to ride. We simply looked at each other, shook hands and said nothing: no words were necessary.

We rolled away in the dark and used a Garmin to navigate to the bottom of the Mortirolo, but this time we were heading up the Pantani version.  It’s a brutal climb, although probably not quite as bad as the Zoncolan.  We eventually summited, just 12 hours after we left the same place, as the sun hit the final two corners.  It was only 8 degrees C!  We just rode as hard as we could, conscious that time would march on as it always seemed to.

The Mortirolo. 8.00 am and the sun reaches the last couple of corners.

We were on the second big climb of the day, the 20km Vivione, before the first of the fast guys caught us. But the rain was closing in, as it seems to every afternoon and Phil had decided to add a twist: replacing the final 6km climb with a 14km one instead.  I never did find out why…!

But despite this, at 7.15pm, after another 11.5hr ride, we rolled across the line and completed the Cent Cols Challenge, climbing every col along the way – only nine people out of 27 starters achieved that, a success rate of just 33%, versus the normal 80%+ on other variations of the Cent Cols: suffice to say the Dolomites proved utterly brutal and took no prisoners.

It’s still sinking in and I’ll gather my thoughts together in the days to come, but at the moment, I’m simply relieved not to have to get up tomorrow and ride my bike and to have some time for my body to heal and recover.  I’m also frankly amazed that I completed the course, when it seemed so unlikely, day after day.  I’m both elated and dead tired.