We drop down to the beautiful Riva del Garda via the old corniche ‘road’ (??? – when Phil puts ‘road’ in inverted commas, it’s time to worry slightly) and then head north-east for our date with the mighty Monte Bondone.  The CCC Dolomites is considered the hardest of the current CCC versions, largely due to the way Italians build roads: steeply!  Gradients of 15 – 20% + will be commonplace on many of our 100 climbs and the Bondone is our first real exposure to BIG and reasonably STEEP.  But that’s why the Bondone is already steeped in history (esp’ following a historical Giro stage, in a blizzard, which decimated the peleton): Gino Bartali said of it: “I steel myself to confront the mountain head on; hard, malevolent, of rock.”

The other thing we have to contend with is the descents: climbing 50,000 m is going to be difficult (!!!), but descending 50,000 m quickly, but safely, is almost as hard.  Failure going uphill is generally uneventful, but a mistake on a descent could be ‘significant’.  Dolomite descents are often steep, narrow and technical (i.e. difficult road cambers/surfaces/apexes etc) and for this reason, I’m riding a bike with disc brakes.  They’re marginally heavier, adding c.500 g to my bike/wheels, but they make braking much easier and much less tiring.  In the wet, the advantages are even greater.  Phil regards our next climb as the ‘star’ of the day – the narrow road and intricate hairpins to Vignola – after which we head onwards over the significant climbs of the Passo di Compet and the Passo Brocon.

The stats tell me this is going to be a very big day and I suspect it’s going to require a pretty big effort: think #nowheretohide 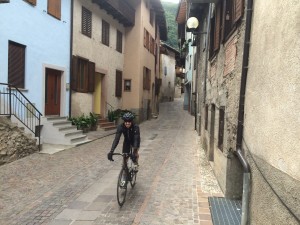 The next 11hrs and 9mins (riding time): the longest day I’ve ridden this year and the second most climbing I’ve ever done in a day.  I felt better than yesterday, managed my efforts, ate better, stayed hydrated and generally rode well.  However, 225km and 5,900m of climbing is huge and it takes time.  I averaged my benchmark: 20kmh, but that still meant I finished in darkness, along with Loren from San Diego, who had ridden the entire day with me.  Not everyone made it to the finish before utter darkness stopped play. 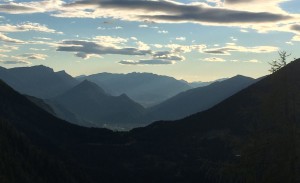 This is why we came… (note the encroaching darkness…)

This is why we came – and it’s where we’re going tomorrow.

I apologise for the brevity of this post: it’s late and I need to stretch and go to sleep.  Tomorrow is apparently “really hard.”  Which would be funny if it wasn’t true.

Today was simply brilliant and one of the best days of riding I’ve ever done.  SGL 🙂