From the Veronese hills to the National Lessini Park, this stage takes us from woodland to barren, windswept, highland scenery and then back into the mountains at the end. It contains two of the longest climbs (24 and 26 km) as well as the two steepest and most dramatic descents of the whole event.  The Passo Santa Barbara is a very memorable way to finish, with some very hard climbing.

I tried something smart today, but quickly failed miserably, with tears of utter frustration rolling down my cheeks: I tried rolling away at 7.05am in the hope that I could finish in daylight – the stats alone told me that this was going to be an epic day: 205km and almost 6,000m of climbing.  But things come in threes and all were bad.

The first problem was when I managed to throw my electrolyte powder all over the floor: it was our hottest day so far and that’s a bad thing to be without in the heat.  The second problem was that I headed the wrong way out of our hilltop hotel.  After 3 km, I realised my mistake and turned around, to climb 3km at 15%, back to the hotel.  By the time I got there, it was 7.30 am and I’d failed miserably to gain any time: my sunglasses hid my tears.  All I’d done was smash my knees again.

And then, about 10km down the road, three of the super-fast brigade came past and a rock flicked off Graeme’s rear tyre, hitting my shin bone with a solid thunk and removing a small chunk of skin!

The day was starting badly, but if things come in threes, I was in theory, done.

The ride was super hard and when I finally rolled into the hotel at 9.30pm, Phil came to greet me and to tell me previous riders had considered this one the hardest stage of the entire event.  I would concur.  It’s simply epic and when I can add together the km of ascent, I suspect it might be over 100.  That’s ludicrous.  Add in the constant 10 – 17% pitches and it just gets even more daft.

Loren rode with me all day.  I snapped one superb picture of him descending the Passo del Creer. 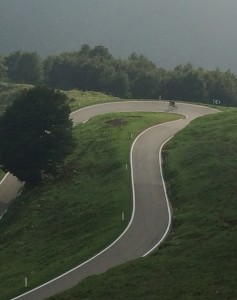 Loren, Passo del Creer. This is why we came…

Amazingly, although my knees remain puffy and all my usual pains greet me from time to time thought the day, I’m still able to ride.  Several people sat it out today and others climbed off their bikes.  Loren and I agreed early on that we were prepared to ride in the dark again and comfortingly, the rain closed in as dusk arrived!  We found Dale about 20km from the finish and the three of us stuck together in pitch darkness to the very end.

It’s been a very long day and tomorrow we have to face the Gavia and the Mortirolo.  It would be so funny if it wasn’t true…