This is a big stage, both physically and mentally.  The end will be in sight now, but the Gavia has an epic reputation for bad weather and snow can fall here at any time of the year.  I briefly visited the Dolomites in early June 2013 and the photo below was taken on the Gavia.  I was there to watch the Giro d’Italia, but the stage was cancelled completely, when five feet of fresh snow fell overnight, bringing back memories of Andy Hampsten’s 1988 epic, Giro winning ride, when similar conditions ensued, but the race went ahead anyway! 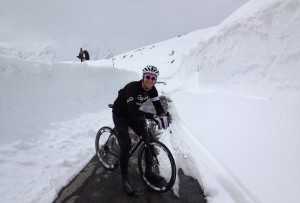 In fact, as I write this, on 15th August, I’ve also had an update from an Italian friend today, saying that overnight, the Gavia had it’s first snows of the coming winter.  Yes, seriously.

The CCC Dolomites has only taken place twice so far and its record of being able to ride the Gavia is one in two (2012 was impassable, 2013 was feasible, just).  If the weather allows us over, we’re in for a treat – it’s an epic climb, steeped in history and it’s also the turning point for the ride – mentally at least.  Although having said that, from the Gavia, we move onto another legendary climb, the Mortirolo, but today, we cross it from the east, which is really hard, but not quite as hard as the northern approach, from Vattelina.  But that’s tomorrow’s story…

Sorry – close to crisis point and no blog tonight – just no time available.