Phil Deeker says: “Across more tranquil wooded hills we cross the upper reaches of the Loire, climb up into the hills of the Haute Loire following the impressive “Routes des Balcons”, before finishing the stage on the northern slopes of the Ardeche, eventually coming down to our rest-day hotel in the charming small town of Annonay, at the gates of the Ardeche region.”

And on the fifth day, it rained.

The Cevennols, the torrential seasonal rains that locals had spoken about before our Cent Cols started, had finally made their appearance. The storm had already battered Corsica and the Cote d’Azur, before moving onto us, Team LMT. We rolled out marginally late, at 7.53am (we had to wait for the baker t deliver bread to the hotel (an old monastery)! It was cold (6 degrees C), crisp and clear. After 2km, we ht our first climb of the day – a 6km one, to warm us up. The light was beautiful, but southwards, we could see clouds rolling in and by our first feed stop, at around 10.00am, the rain felt ominously close.

The night before, the French met office had issued a red alert for rain in our area – 120mm was due in the afternoon! Now, a funny thing happens to cyclists when it rains: they split up. The only way to keep warm in torrential cold rain is to work harder and suddenly, the quick guys need to go and the less quick guys just ride at their own pace. So it becomes a solitary battle for most, against the cold, the slippery roads and the hills. By lunch, the rain had really set in and 120mm seemed like a conservative forecast! 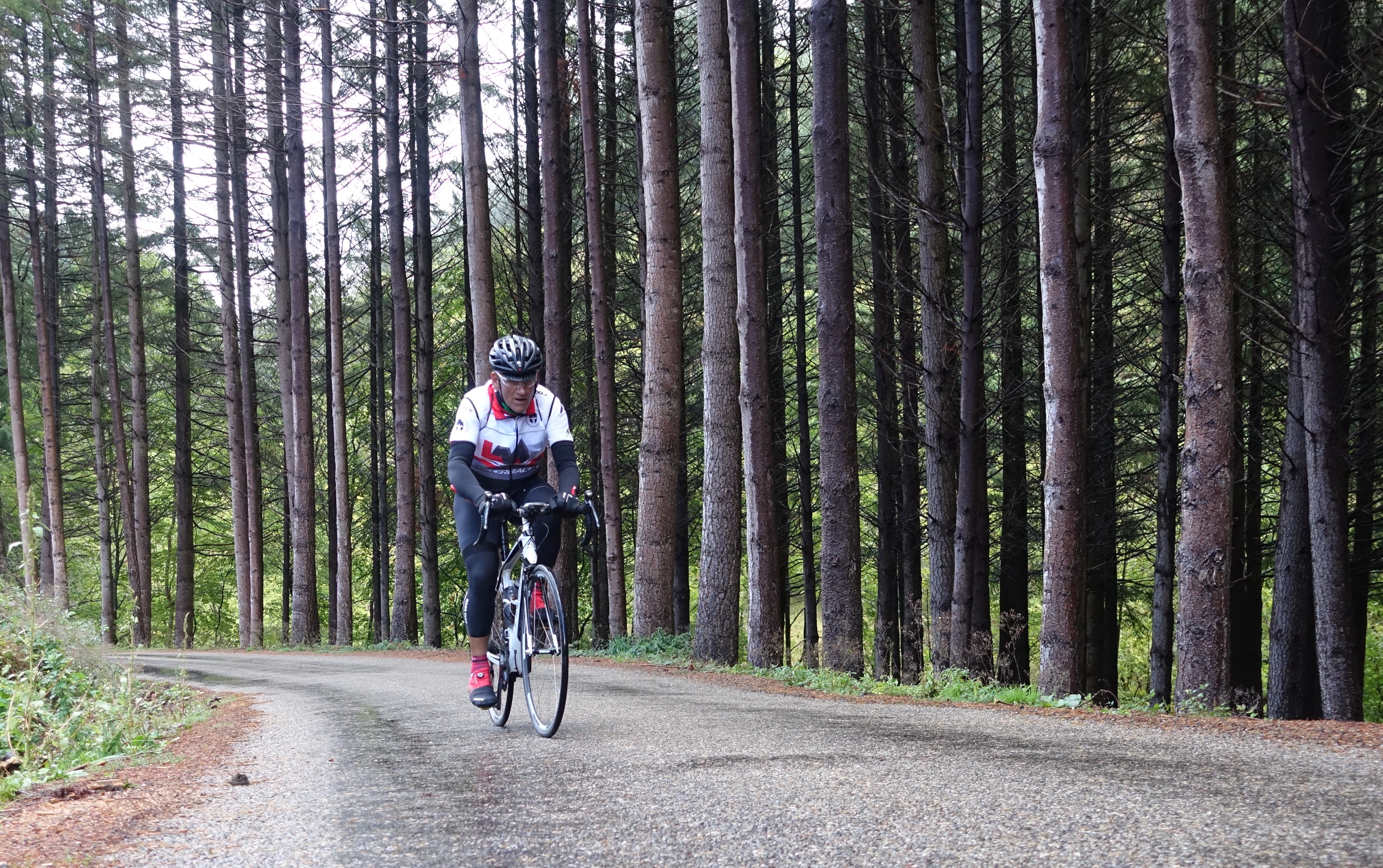 Soaking wet and only another 150km to ride: Allan Greenfield: the King of Pain.

It’s a funny game, riding a Cent Cols. It’s physical, mental and also a battle against the external variables – the weather being the obvious one. Last night, I was tired, angry and very negative – in a dark emotional place. The stage had felt too long, my right knee was hurting, my legs were sore all over and I’d finished in the rain and the dark. I was tired to the bone and I was incapable of mentally sorting myself out. I went to sleep in a mess.

And yet this morning, despite the impeding deluge, the first hill told me my knee was OK and I had more generally energy than yesterday. My spirits lifted.

Somewhere around mid afternoon, after c.5 hours in the rain, they sunk a little lower again – it was 9 degrees C, and I was soaked and the cold was slowly seeping into my bones. In various places over a 20km stretch of road, every single rider was fighting their own personal battle against the rain, their resolve and the ceaseless hills. 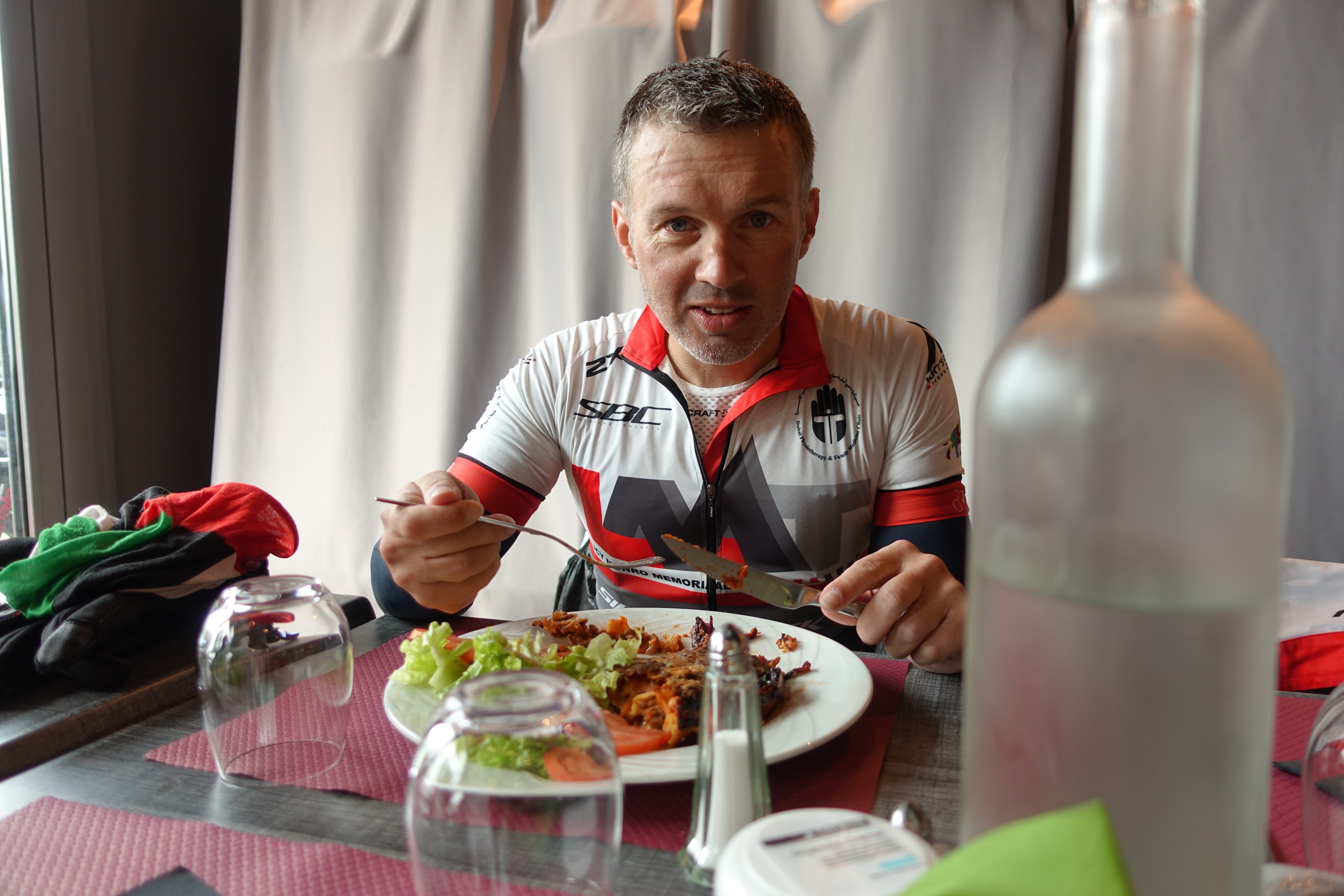 Finally, after a road that rose pretty consistently for almost 65km, I crested the final col and started the 25km descent to the finish in Annonay. This was the bit I’d been dreading for the previous 5 hours. Climbing had generated some small degree of heat, but now it was time to freeze and freeze I did. I shivered my way down the hill, screaming at the elements as cramps wracked my shoulders. Finally at the hotel, I undressed in the corridor and stood in the shower for 20 minutes, groaning as warmth seeped back into my body.

I’ve been riding bikes in sometimes tricky places for a long time, but I’m not sure that I’ve ever suffered worse than I did today. Many others confirmed the same over dinner.

Now it’s time to lay out some very wet kit in the hope that it might dry a bit, stretch my legs and then sleep. Tomorrow we have another bunch of cols to climb and it’s a hard day apparently – another one! On day seven, Monday, we’ll finally have a day to rest. I’m focused on that. Very focused on it. SGL, Sat 5th October, Annonay, France.