Phil Deeker says: “Containing one of the most memorable Cols in the Cevennes, the Col de l’Asclier, this stage offers us our last climbs and views of this formidable National Park as we follow the “Corniche des Cevennes”. A couple of tough climbs here, followed by superb descents make this final stage spicy enough to make a fitting finale to an extraordinary journey.” 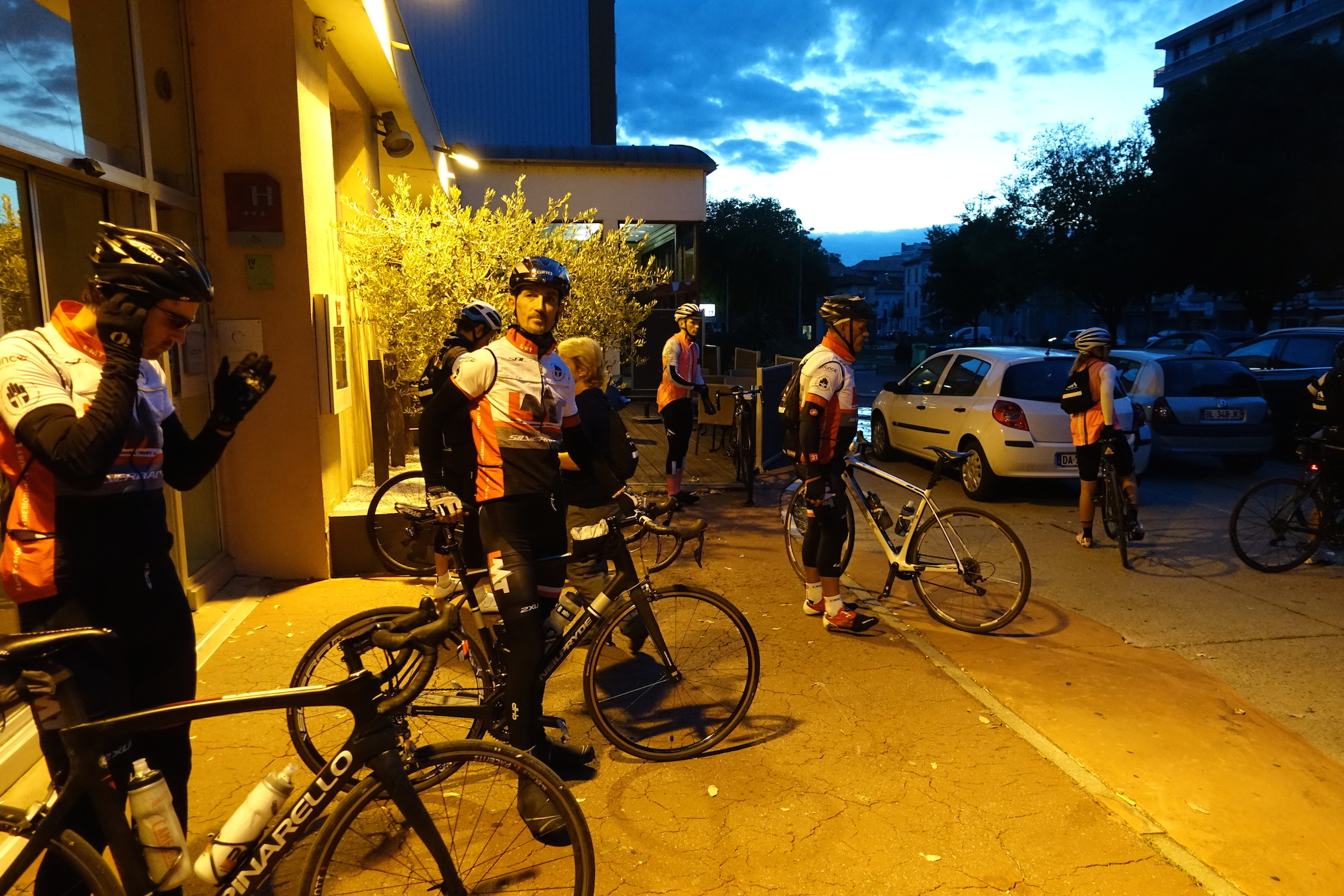 Our last early morning roll out.

5.55 am. The alarm goes off as usual and I begin the process of dragging myself out of bed, which at this point in a Cent Cols is difficult, to say the least. I pop a couple of pain killers and head downstairs for breakfast. 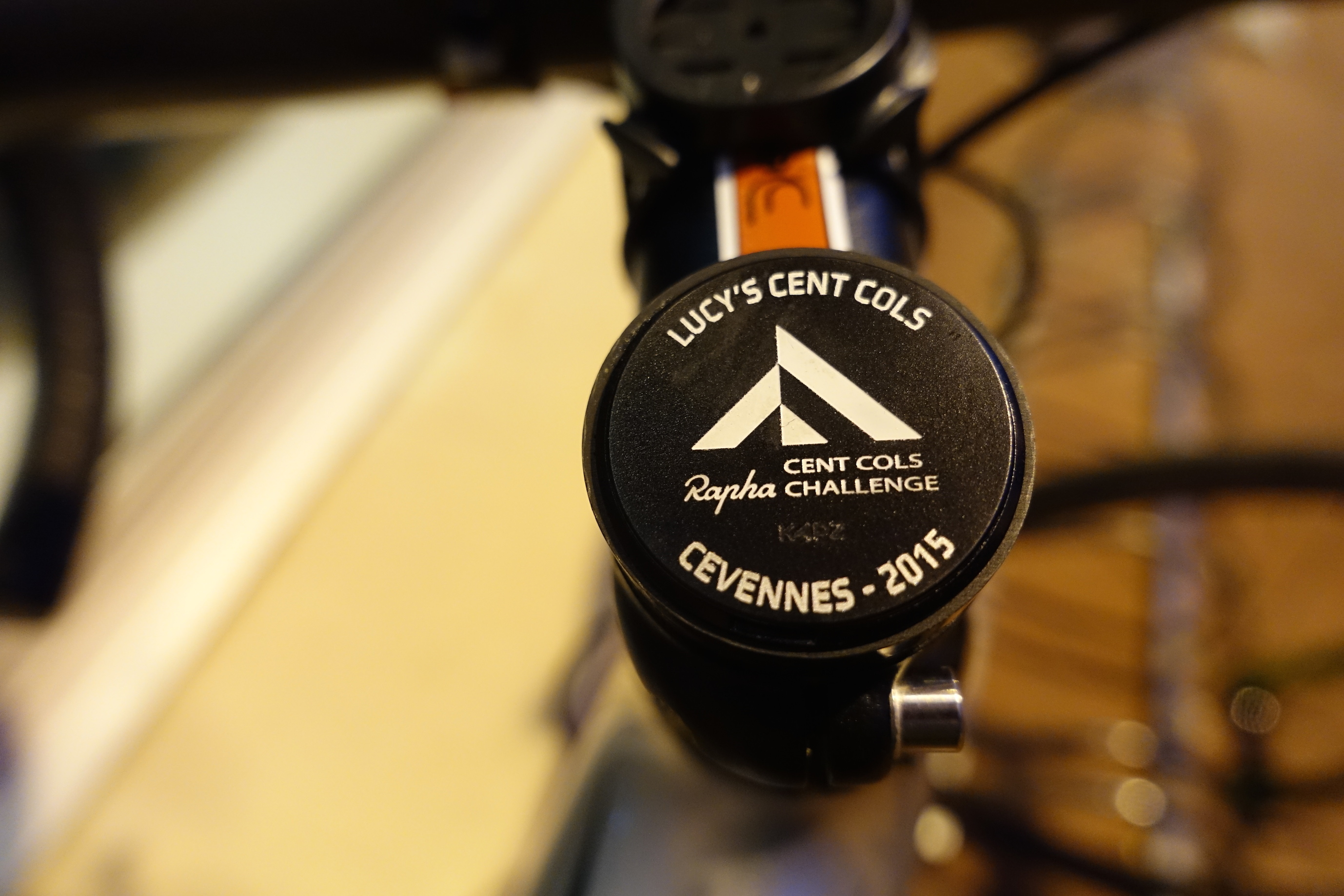 Stem caps don’t get much more special than this – thank you to Khush Jabble from KAPZ.

At 7.30, we roll out of the center of Ales and head into our first couple of climbs. The first feels OK, but my knee really hurts on the second – I think I may have tendinitis in my right VMO, or maybe even a small tear. However, I’ve come way too far to quit now, so I consign myself to a ‘trying’ day. The first feed comes at 60km and we completely regroup, not least to allow Jonny to fix Michael’s bike, which he does with customary ease, while we all stand around waiting! 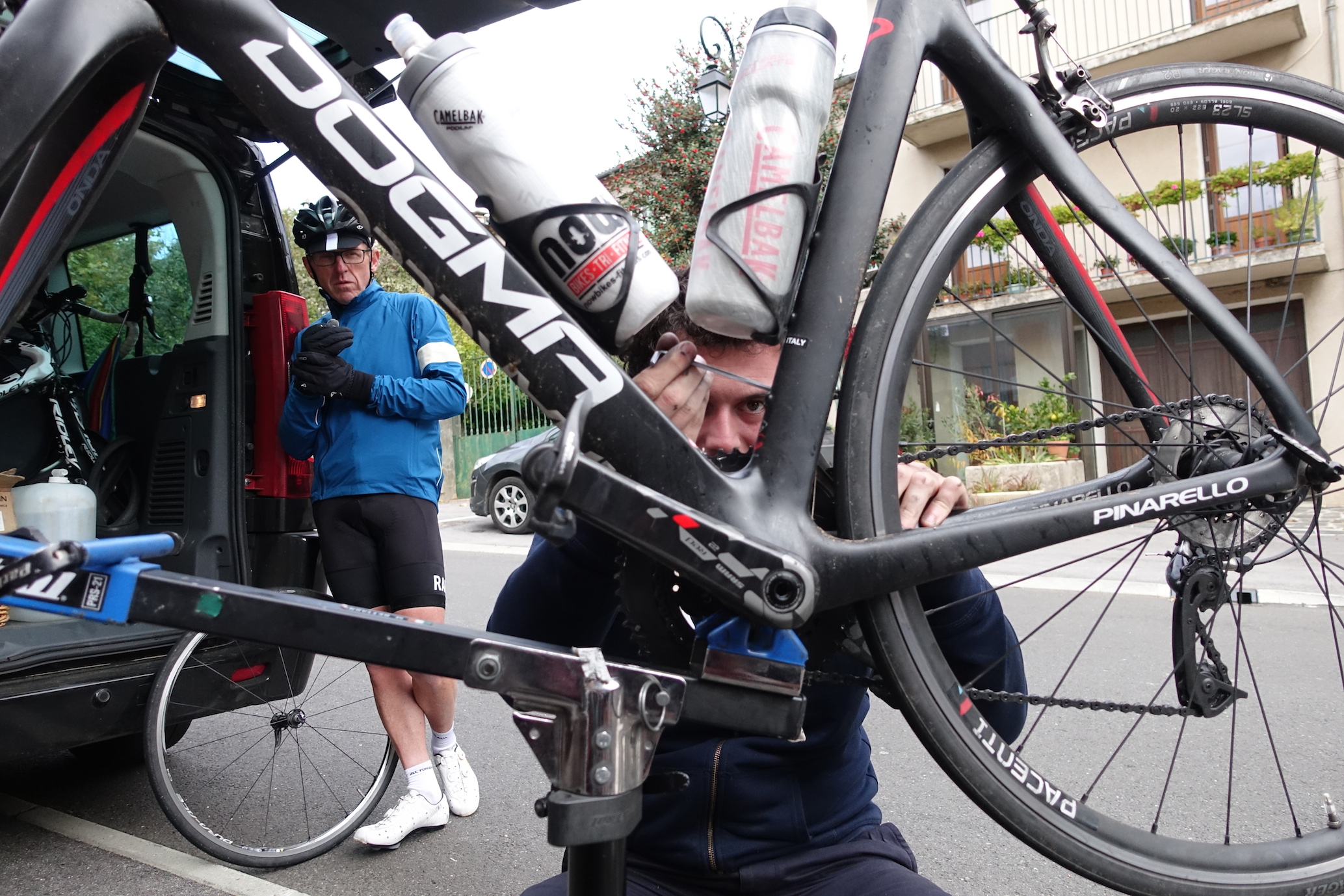 No pressure Jonny! It’s not like we’re all waiting!

Becks, our canine mascot, stands guard over our bikes, complete with LMT dog rug, while we feast on cake and coffee!

Jonny hands Michael his bike who breathes a sigh of relief and then we’re all off again, down a steep, tight and twisty descent.

The main event of the day is the Col de l’Asclier: it’s not too long, but it’s steep. At the top, we collectively breathe a sigh of relief – it’s not the last col, but it’s the last really hard one. We descend to lunch – our last lunch by the side of the road, which we eat sitting on a wall in the sunshine. 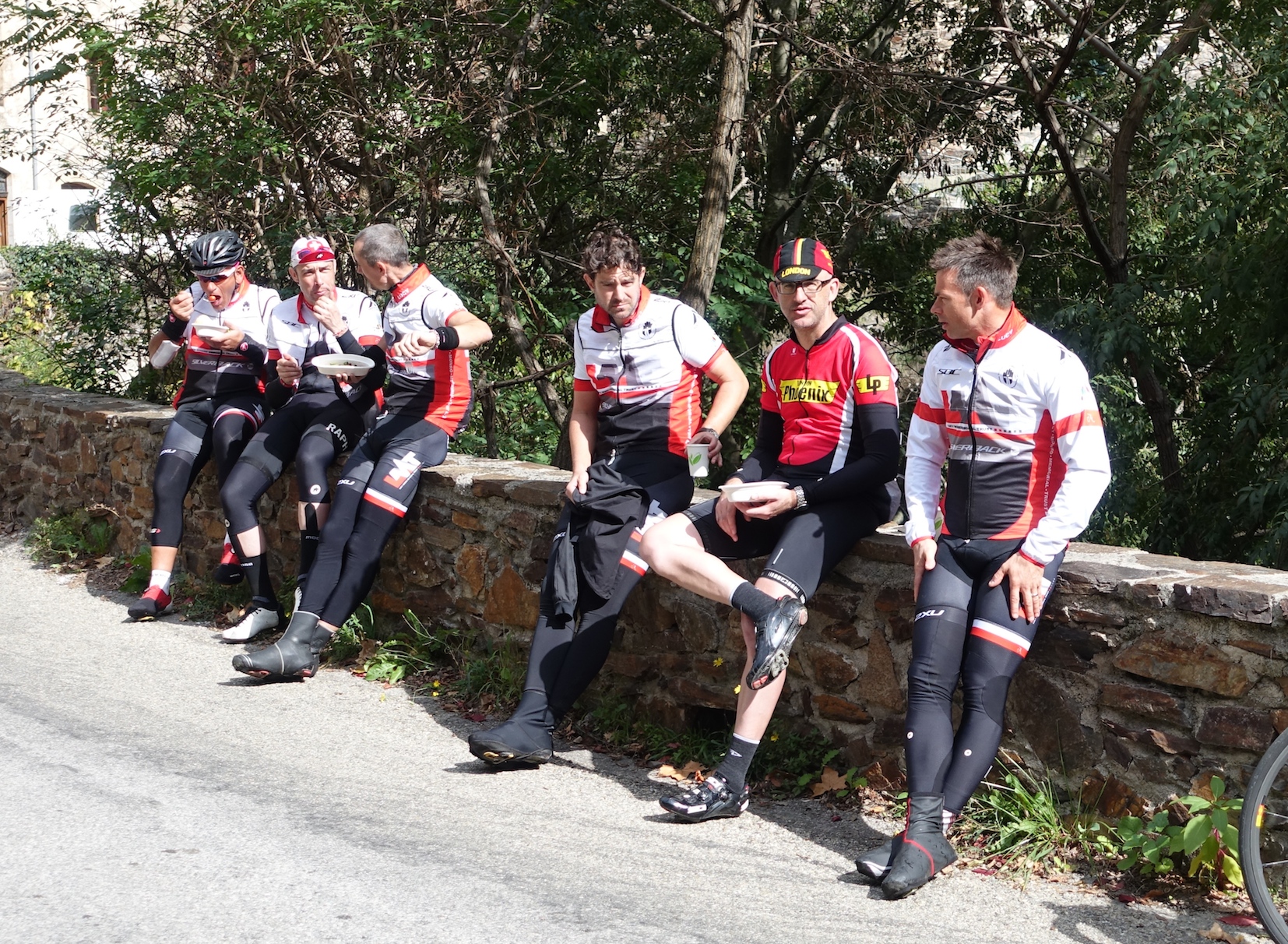 Lunch on a Wall

From there, it’s another 60km to Montpellier and we while away the time with a cake celebration and a Team LMT led ride for the last 25km. 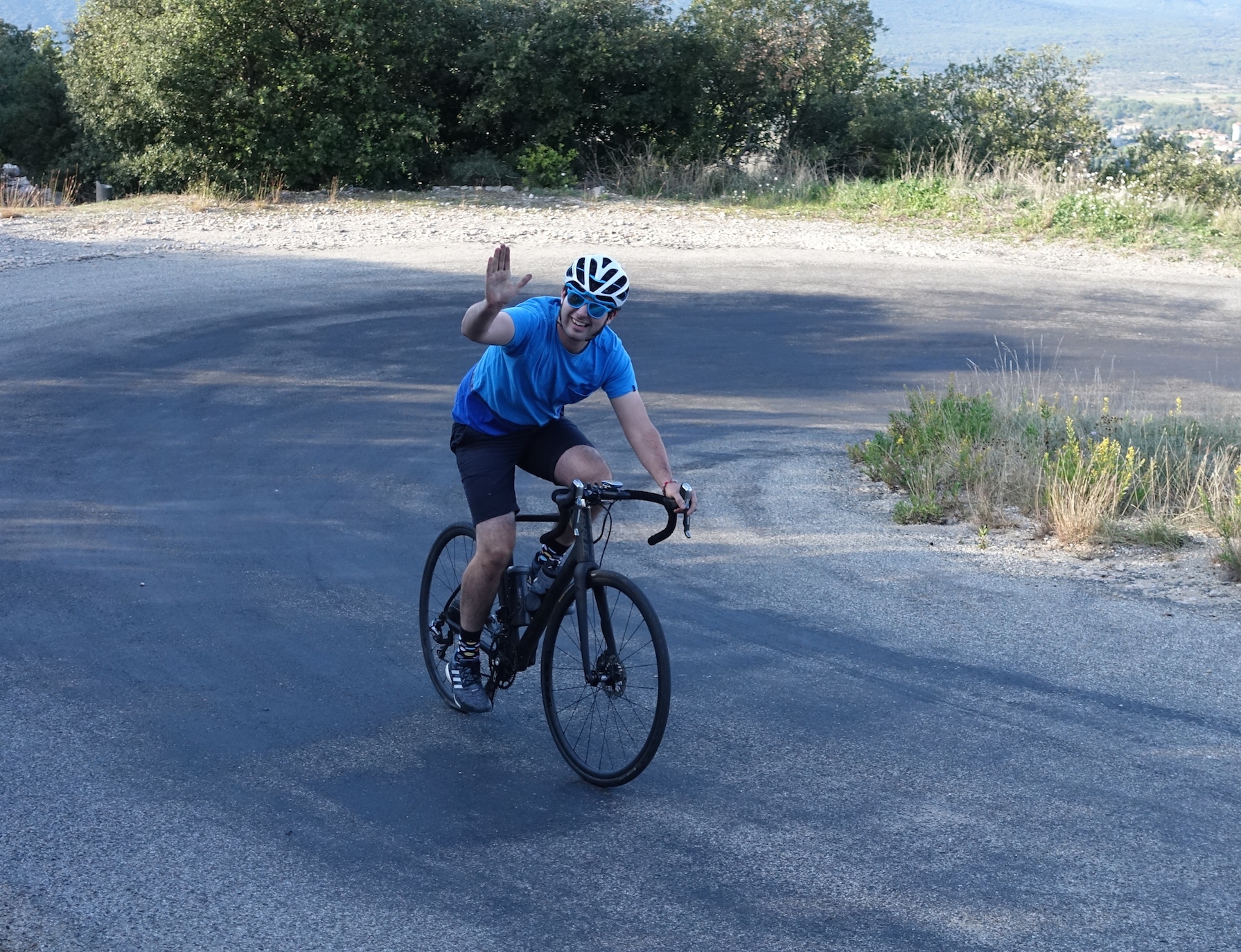 Finally, we’re there, back where we started. But we’re different people now, because we’ve endured far more than we might have believed possible when we set out ten days ago.

We enjoy beers, dinner and awards: Allan Greenfield is awarded the ‘King of Pain’ accolade by Phil Deeker and Michael Hewitt is awarded the ‘Rider’s Rider Award’, as voted for by Team LMT.

Dinner has never been more relaxed and we are deeply content with our achievements. Tomorrow we will all leave this place and before long, LCC will all just be memories. But the intensity of our struggles and the beauty of our photos will leave Lucy’s Cent Cols etched on our minds forever. We believe Lucy would approve of what we’ve done – it was the perfect wake for the cycling part of her life.