The Cévennes are a part of the Massif Central. They run from southwest (Cause Noire) to northeast (Monts du Vivarais), with the highest point being the Mont Lozère (1,702m). Another notable peak is the Mont Aigoual (1,567m). The Loire and Allier flowing towards the Atlantic ocean, as well as the Ardèche and tributary Chassezac, Cèze, the different Gardons to the Rhône, Vidourle, Hérault and Dourbie rivers that flow to the Mediterranean Sea, all have their headwaters in the Cévennes. 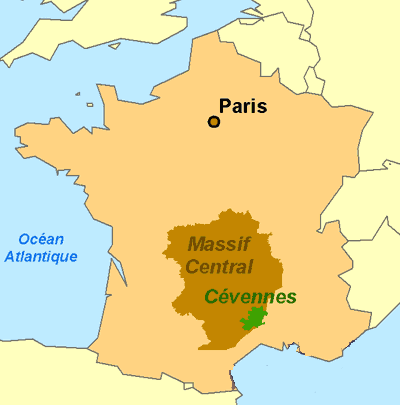 Our route follows a huge clockwise circle from the Mediterranean, up through the Cevennes and the Massif Central and eventually back to our starting point.

Cévennes National Park was created in the region in 1970 and the Parc Naturel Régional des Monts d’Ardèche also preserves some of the natural areas. Two canyons are near the region: the Gorges de la Jonte and the Gorges du Tarn.

Our aim is very simple: to climb 100 mountain passes, or ‘cols’ in just 10 days. This will involve c.2,000km of riding and c.40,000m of cumulative climbing (and the same amount of descending)! In short, a Cent Cols Challenge is a very difficult endeavour.

We start (and finish) in Montpellier on the Mediterranean coast and head north in a huge loop.

The climbs of the Cévennes region may not be world renowned. There’s no Stelvio, Ventoux, Alpe d’Huez, or Tourmalet. Yet to the French, it’s one of their most treasured and respected areas for tough cycling and it’s rich in local cycling history (Tim Krabbe’s classic book, The Rider, is based around our first day of climbs).

As a region, it’s very sparsely populated and extremely remote, mainly due to its’ rough terrain. Yet it’s riddled with a network of roads that are a cyclists’ dream.

The majority of this event explores the National Park of the Cévennes and the Ardeche, in particular, but the regions of the Aubrac, Auvergne and the Massif Central also feature.

Held in early October, the weather could be extremely varied – it might be mild, with autumnal colours starting to further embellish the scenery, or we might have days of torrential rain, followed by frosty mornings! The latter stages are deliberately shorter to accommodate the dwindling daylight hours. The mountain range gives its name to a meteorological effect when cold air from the Atlantic coast meets warm air and southern winds from the Mediterranean and causes heavy autumnal downpours, often leading to floods. These are called épisodes cévenols. We are hoping to avoid such episodes!

Seldom are events held in this fascinating part of France: the remoteness of the Cévennes and Ardeche can easily compromise safety. For this reason, the event was always designed to be ridden as a group and is therefore perfect for Team LMT.